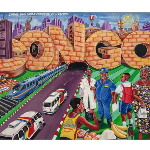 The Belgian Congo was a Belgian colony in Central Africa from 1908 until independence in 1960. The former colony adopted its present-day name, the Democratic Republic of the Congo (DRC), in 1964.

Colonial rule in the Congo began in the late 19th century. King Leopold II of Belgium attempted to persuade the Belgian government to support colonial expansion around the then-largely unexplored Congo Basin. Their ambivalence resulted in Leopold's establishing a colony himself. With support from a number of Western countries, Leopold achieved international recognition for a personal colony, the Congo Free State, in 1885. By the turn of the century, however, the violence used by Free State officials against indigenous Congolese and a ruthless system of economic exploitation led to intense diplomatic pressure on Belgium to take official control of the country, which it did by creating the Belgian Congo in 1908.

Belgian rule in the Congo was based on the "colonial trinity" (trinité coloniale) of state, missionary and private-company interests. The privileging of Belgian commercial interests meant that large amounts of capital flowed into the Congo and that individual regions became specialised. On many occasions, the interests of the government and of private enterprise became closely linked, and the state helped companies to break strikes and to remove other barriers raised by the indigenous population. The colony was divided into hierarchically organised administrative subdivisions, and run uniformly according to a set "native policy" (politique indigène). This contrasted the practice of British and French colonial policy, which generally favoured systems of indirect rule, retaining traditional leaders in positions of authority under colonial oversight.[clarification needed]

During the 1940s and 1950s the Belgian Congo experienced extensive urbanisation, and the colonial administration began various development programmes aimed at making the territory into a "model colony". One result saw the development of a new middle-class of Europeanised African "évolués" in the cities. By the 1950s the Congo had a wage labour force twice as large as that in any other African colony.

In 1960, as the result of a widespread and increasingly radical pro-independence movement, the Congo achieved independence, becoming the Republic of Congo-Léopoldville under Prime Minister Patrice Lumumba and President Joseph Kasa-Vubu. Poor relations between political factions within the Congo, the continued involvement of Belgium in Congolese affairs, and the intervention by major parties (mainly the United States and the Soviet Union) during the Cold War led to a five-year-long period of war and political instability, known as the Congo Crisis, from 1960 to 1965. This ended with the seizure of power by Joseph-Désiré Mobutu in November 1965.
You must login to be able to comment on videos
Reply